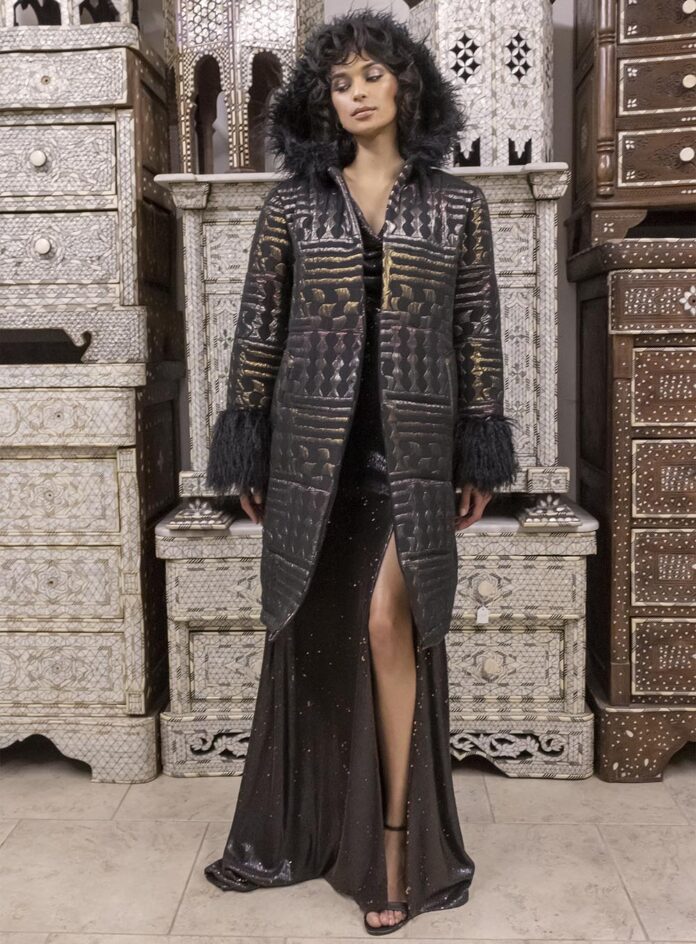 Kevan Hall’s Fall/Winter 2022 collection: Trading Post! envisions a burgeoning time when travelers would meet to exchange wares, folklore, and handcrafted textiles from Mali, to Morocco, to the legendary Tarshish.

His use of regional fabrics, accented with blackened gold and copper metallics, reimagines a glorious era of seafaring trade and opulent beauty. 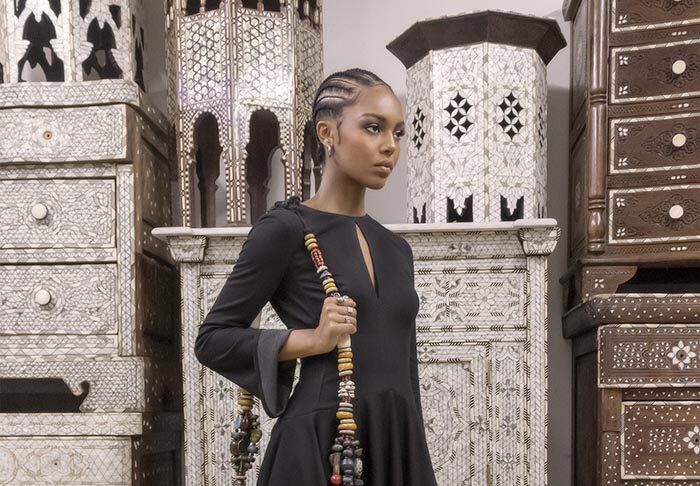 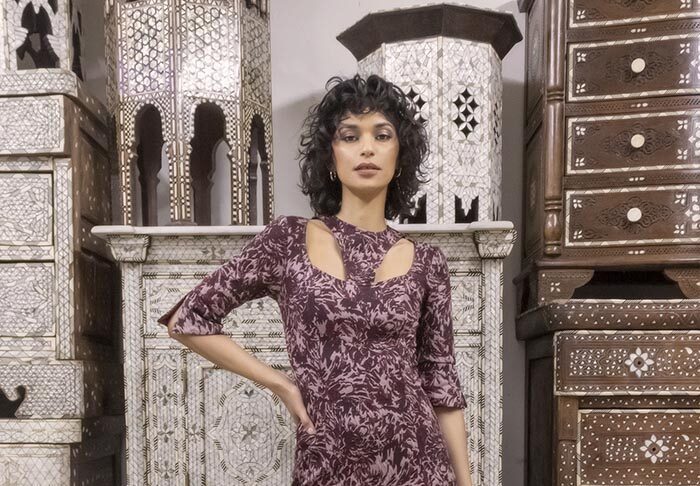 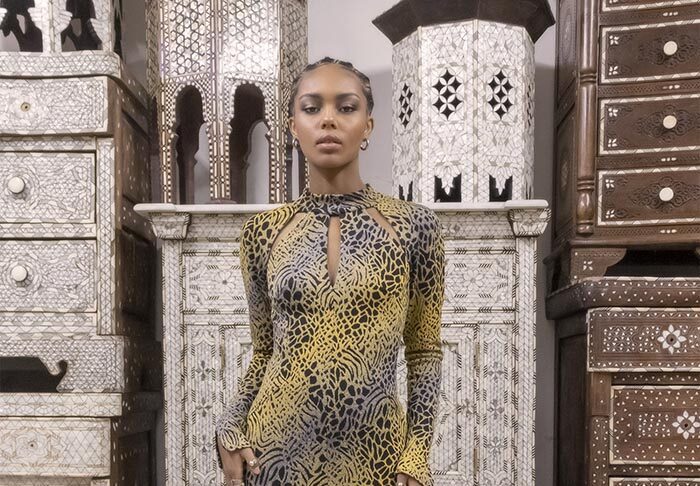 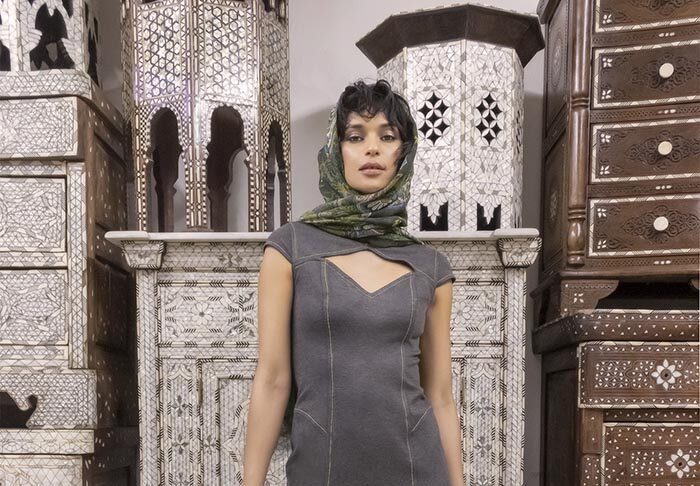 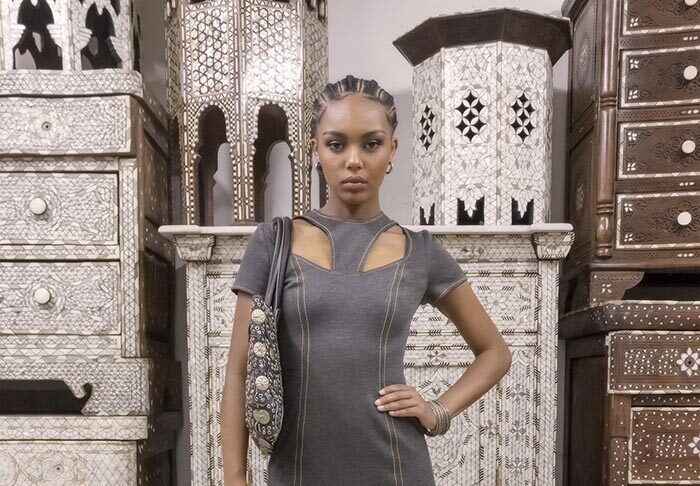 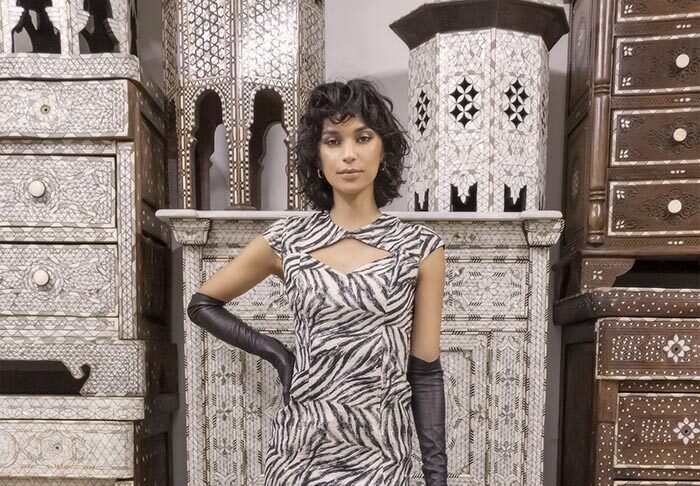 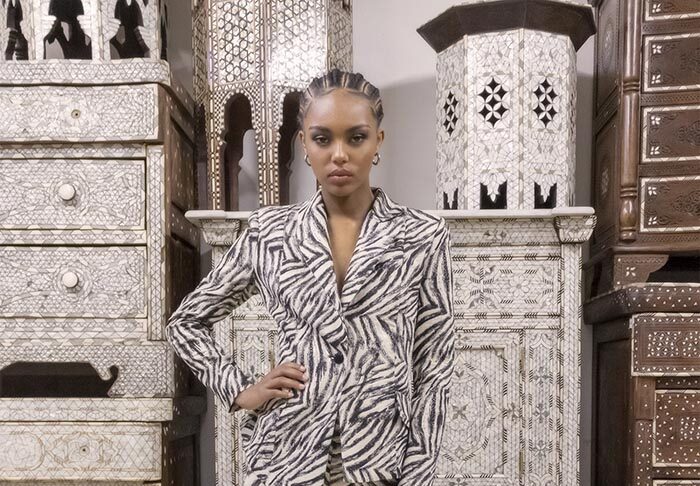 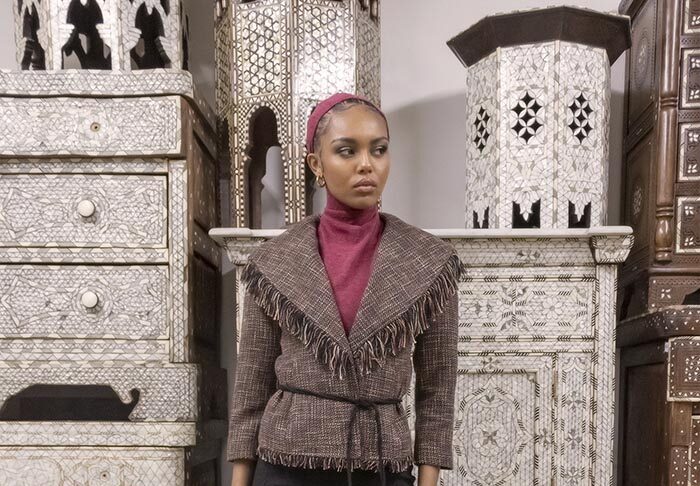 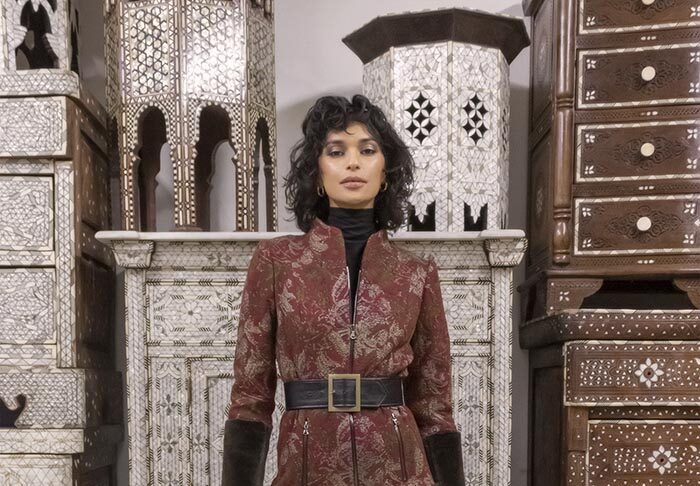 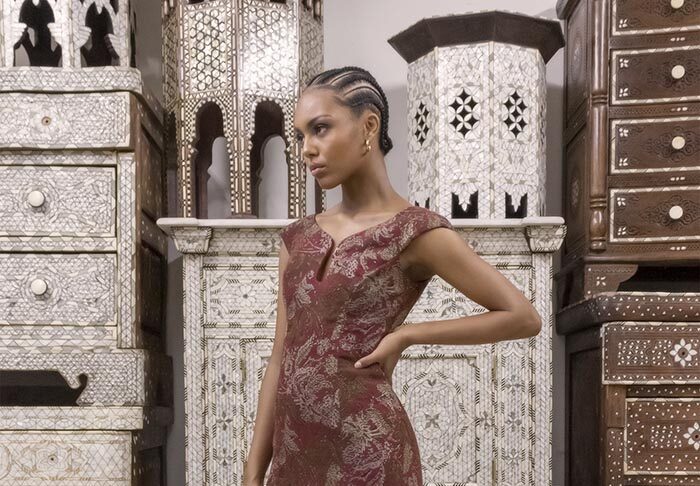 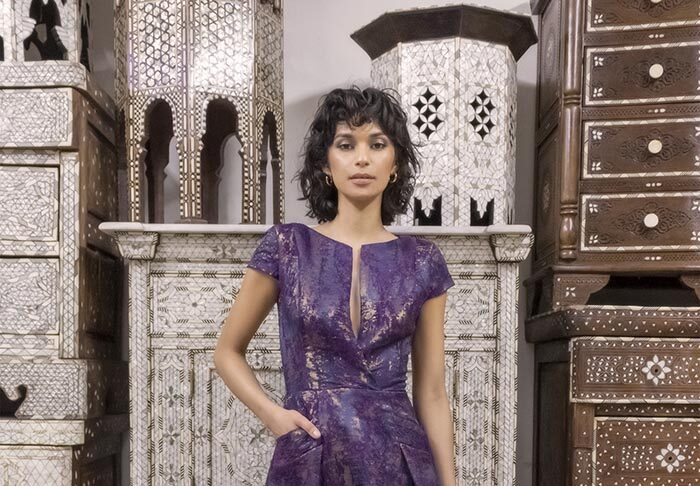 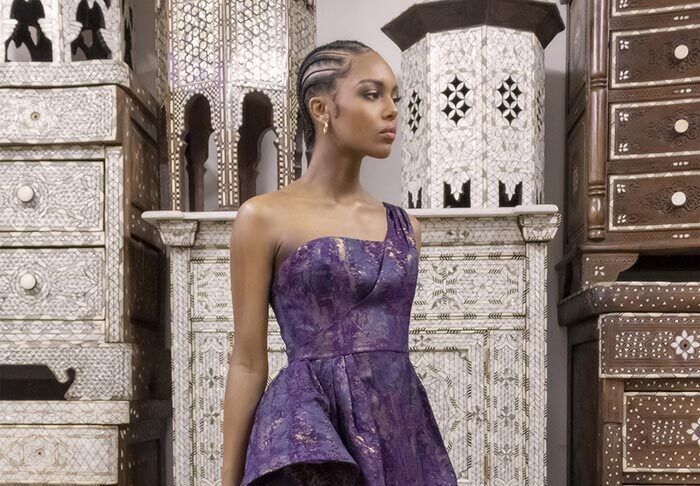 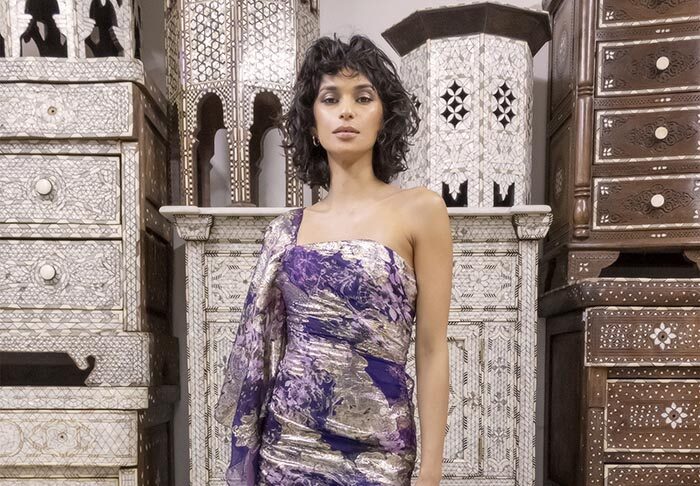 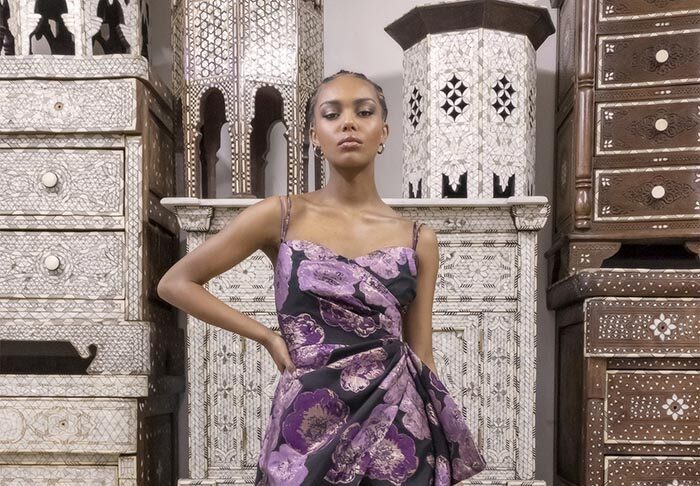 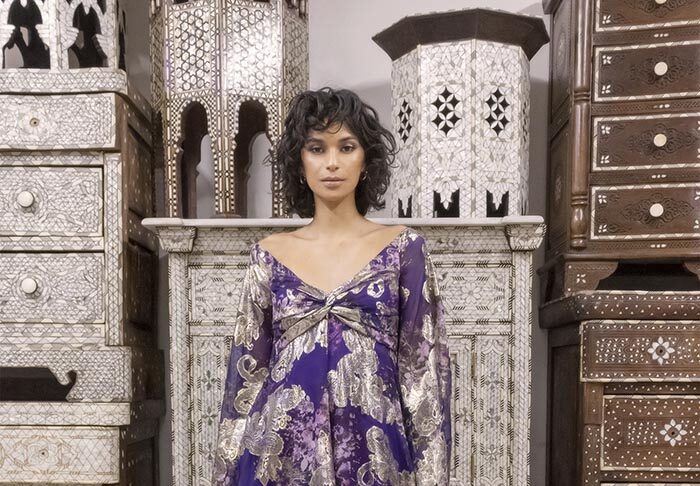 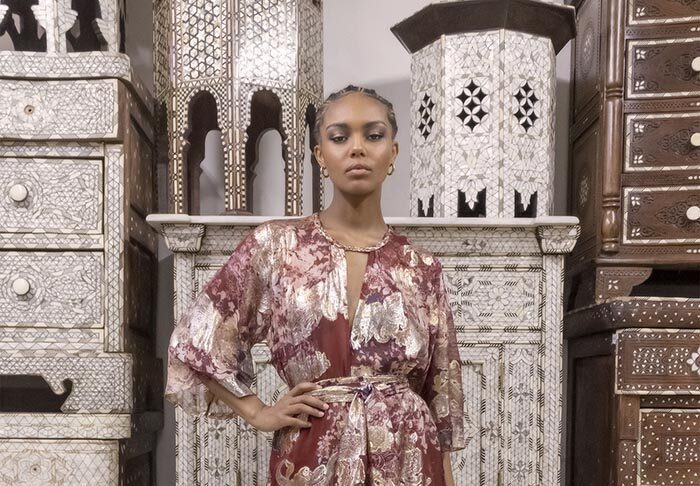 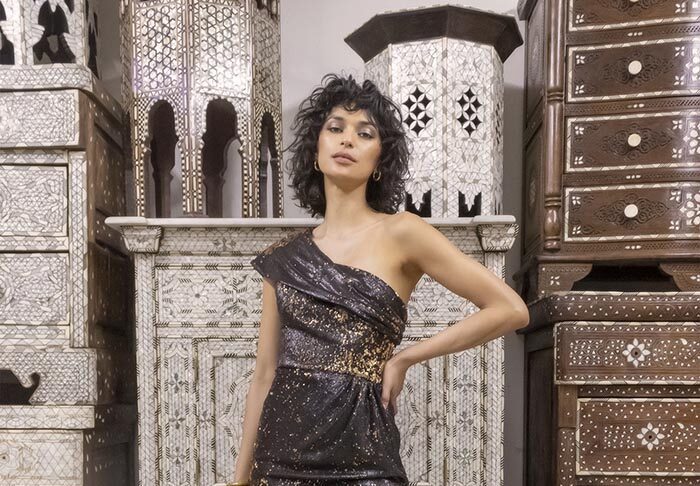 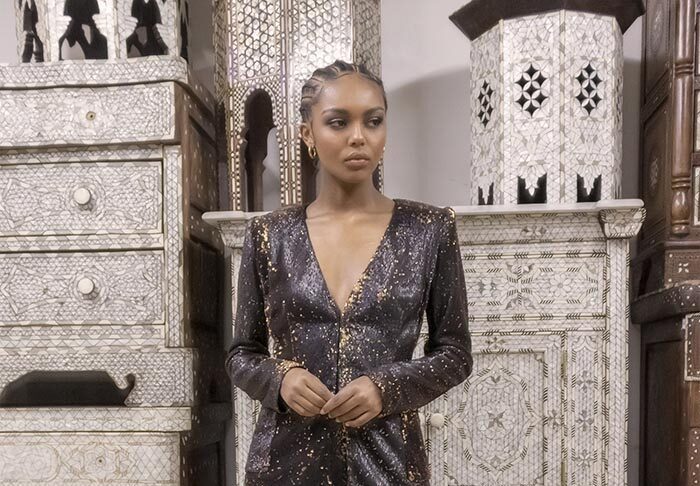 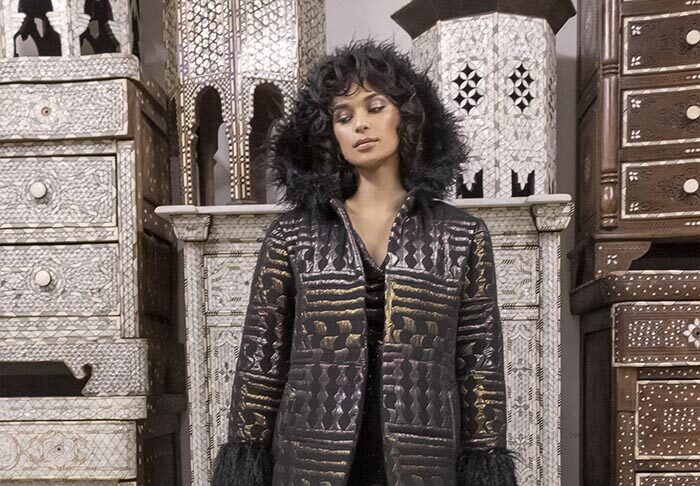 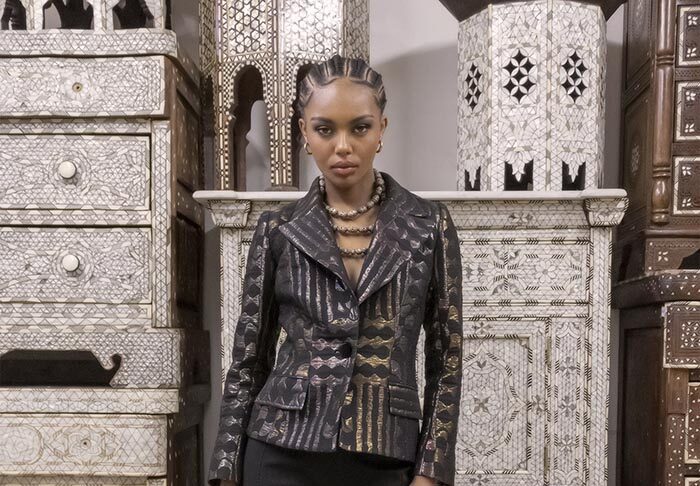 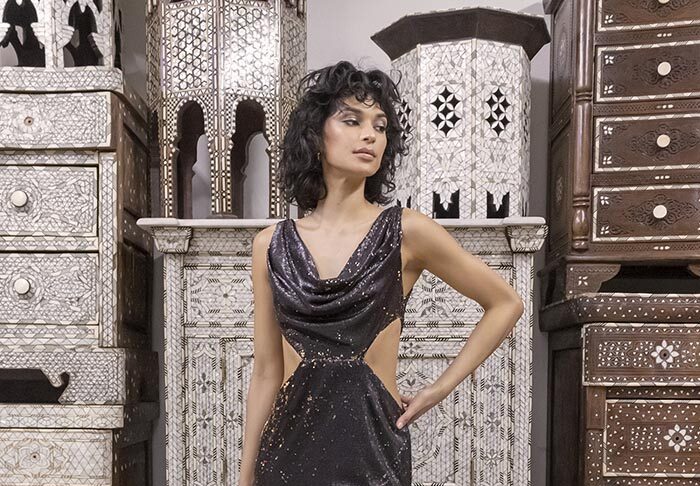 The womenswear collection includes textured prints inspired by Northern Africa that are transformed into timeless signature pieces. By incorporating rich jacquards, matelassé, and brocades, Hall uses materials to take us on a journey through history. Trading Post! locates us at a new and unique intersection of time and place – one that is currently uniting us all from great distances.

Set among a warehouse of traditional and contemporary Moroccan and Middle Eastern furniture and antiques, the show started with elegant day dresses in abstract floral and animal prints, then led into more sharply tailored pieces in weighted materials such as brocade, and followed by Hall’s signature eveningwear ensembles. The latter materialized this season as gowns done in bold metallic florals with sensuous heavy drapery creating cascades of movement and fluidity. The final looks of the collection took on the feel of the Islamic Golden Age through the use of black and gold sequins on gowns and suiting, as well as an Arabesque inspired metallic matelassé used for the outerwear.

As his second collection back on the runway after a 20-year hiatus from showing, Hall brings us all his signature looks of elegance, modernity, and the much-needed return back to formality.

Detroit-born Kevan Hall’s fashion creativity emerged early. By the age of seven, he knew he wanted to be a fashion designer.

Redefining glamour for a new generation is an interpretive art. Redefining the hallowed house of Halston into the next millennium was an even more challenging task. But Kevan Hall, who stepped into the prestigious position of Design and Creative Director from Fall 1998 – Spring 2000, revived the dormant brand to its former glory. His sleek eveningwear was worn by a distinguished coterie of celebrated artists including Celine Dion, Sharon Stone, Charlize Theron, and Salma Hayek.

In 2002, he launched his own signature, Kevan Hall Collection with a fashion philosophy that emphasizes purity of style, incomparable tailoring and sensuously draped streamlined silhouettes; Hall has a natural design sense of sophisticated elegance and uncluttered modern design. In 2002, Hall won the 47th Annual Gold Coast Fashion Award in Chicago as “Designer of the Year.” In 2005, Hall was awarded “Stylemaker of the Year” by Life & Style Magazine for his ‘drop-dead glamour’ as seen on the red carpet with Vanessa Williams, Virginia Madsen, Tina Fey, Debra Messing, Sandra Oh and later Ms. Ruby Dee for her 2008 Oscar nomination, and Gabourey Sidibe for her 2010 Golden Globe nod. Felicity Huffman won “Best Actress in a Comedy Series” at the 2005 Emmy’s wearing his rouge silk gown with Swarovski crystal accents. Mom’s Allison Janney took home the Critics’ Choice TV Award for “Best Supporting Actress in a Comedy Series” in his Signature navy off-the-shoulder sequin jersey gown in 2015.

Hall has made guest appearances on numerous national TV shows such as Real Housewives of Beverly Hills, Kimora: Life in the Fab Lane, Today Show with Kathie Lee and Hoda, Inside Edition and E! Fashion Police with Joan Rivers where he discussed fashions’ current trends on and off the red carpet.

Throughout Europe, he sold his exclusive collection of dresses and separates, Kevan Hall Inspiration on tv shopping channels QVC and HSE24 Italy.

He has given lectures at the Norman Lear Center of the University of Southern California, for the Costume Council at the Los Angeles County Museum of Art and “Fashion Speak” conference in Detroit on his inspirations and influences when designing his collection.

Hall is a founder of The Novus Forum, an international collective trade show that features luxury womenswear and accessory designers. It has become the fashion destination for global buyers during the NY fashion market.

Hall gives back as one of the founders of Black Design Collective, a nonprofit established to create scholarships, educational and business workshops and mentorships for young designers to pursue a career in fashion and costume design.